Have had a very productive week, this week.  Monday and Tuesday was a great opportunity to catch up with my friends who sit on the National Dementia Australia Advisory Committee (DAAC), some of us meeting, face to face for the first time.  We meet monthly via Zoom, but this is the first face to face meeting we have held since I joined the Committee 15 months ago.

It was great to have an extended time to sit and discuss all the things that we never seem to have time to get around to.  Lots of business covered, time to speak to both Dementia Australia’s Chief Executive and a representative of  the Board. Still no sign of a person living with dementia on the Board, but at least there is recognition that better communication is required, so a start, and we are certainly not going to let it go at that!!

Wednesday was equally exciting with the initial meeting of the Lived Experience Dementia Advisory Group (LE DAGs), who will be advising the Central Coast Dementia Alliance (CCDA). The CCDA have been doing some great work in the relatively short time that they have been going, and have just completed a series of information sessions for carers (both family and paid carers).  I joined the Alliance in July and we have been seeking expressions of interest from people living with dementia and or their carers living on the Central Coast of NSW, here in Australia.  We now have 6 people on the Advisory Group, who all met each other for the first time on Wednesday.  Over a cup of tea, we were able to get to know each other a little better and work out how we want the group to work – our role; how we wish to communicate to make it as dementia friendly as possible for all concerned; and frequency, location, suitable days / times and duration of meetings. Doesn’t sound like to much, but I came away feeling comfortable that we were well prepared to move forward in the New Year.  All very exciting.

Finally, found out from friends that I had been featured in a whole range of regional newspapers – 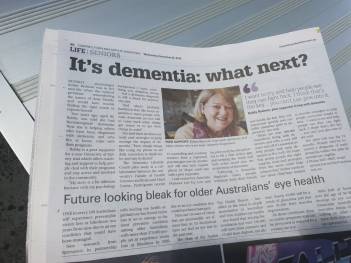 big surprise, as the information all came from a media release that went out from Sydney University at the beginning of the year.  Not sure why they decided to run it this week, but there you go!!!!!

The rest of the week has been taken up with Christmas parties and selling Christmas trees for Rotary – so plenty of friendship and fun all round. 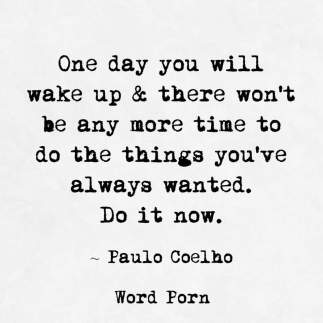 4 thoughts on “Another Big Week”